MISSIONTELANGANA
– AUGUST 16, 2011POSTED IN: COVER STORY
Read the First Part of this series here: Opinion Poll in Andhra Pradesh: Not Funny Anymore
The CSDS Telangana Survey Is A Fraud – Part 2: It Can’t Get Worse Than This:
When people of Telangana and Seemandhra are ranged against each other, it will be prudent on the part of a honest survey agency like CSDS to engage researchers from the neutral academics. But, what did CSDS do when it wanted to know the opinion of Telanganites on separate statehood? It engaged a professor at Acharya Nagarjuna University named P Narasimha Rao, who is the honorary Convener/President of Samaikyandhra Joint Action Committee.

For people who are not aware, Samaikyandhra Joint Action Committee runs the anti-Telangana movement in the Coastal Andhra and Rayalaseema regions.
Acharya Nagarjuna University in Guntur disctrict, is one of the important centers of United AP movement. On several occasions, students and faculty of Nagarjuna University participated in various agitations in support of a united Andhra Pradesh.
Given this background, it is unfathomable how CSDS thought they could get a correct picture by involving people like Pemmasani Narasimha Rao.
What’s more, students of Nagarujuna University, who were sent to Telangana towns to conduct the CSDS survey, were caught red-handed trying to rig the survey on multiple occasions.

Picture: Image showing Nagarjuna University students conducting the CSDS survey, being detained by Telangana youth as they tried to fill up the questionnaires themselves
–
The local youths in two towns – Mahabubabad and Vardhannapet chased the CSDS representatives as they were trying to take down the names and addresses of illiterate locals and filling up the survey questionnaire themselves.
Pemmasani Narasimha Rao’s Doubtful Credentials:
The Professor, who was entrusted by CSDS to carry out the Telangana survey – Pemmasani Narasimha Rao is a guy of questionable character. He runs a ‘recreation club’ in Vijayawada, named ‘The Patamata Cultural and Recreation Society’.
It is a known fact that such ‘recreation clubs’ are centers of illegal activities like gambling.
On 19-5- 1997 at 22-30 hours, the Vijayawada Police received reliable information that certain unlawful betting activities were happening at Patamata Cultural and Recreation Society. The Assistant Commissioner of Police, Vijayawada, and Sub-Inspector of Police Sri D.N.V. Prasad along with his staff raided the Patamata Cultural Club at 22-30 hours and arrested 46 persons while they were playing 52 cards by betting money and seized the 52 playing cards (Kothamukka) and an amount of Rs.19,500/- from the 46 persons and arrested them on the spot.
–
It is sad that a reputable research organization like CSDS, being run by respected intellectuals like Yogendra Yadav, has engaged a person with a known bias and questionable background to conduct an important survey.
We demand that CSDS should immediately disclose all the survey questionnaires, details of respondents and also render a public apology to the people of Telangana for this grave mistake.
Posted by విశ్వరూప్ at 11:05 1 comment:


**********
This is the first part in the two-part series aimed at exposing the dangerous fraud scam done by one of India’s most reputed research organizations – Centre for Study of Developing Societies (CSDS). The organization is headed by Professor Yogendra Yadav, a respected intellectual. 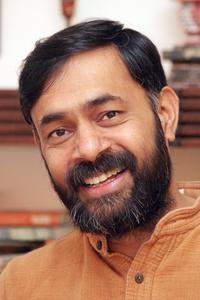 The CSDS survey reminds Telanganites of another conspiracy named Srikrishna Committee, which was hatched by the UPA government and Seemandhras to suppress the Telangana movement.


A recent judgement of the Andhra Pradesh State High Court has severely reprimanded the Srikrishna Committee members for their recommendations on how to suppress the Telangana Movement.


Mission Telangana has done a thorough investigation and has come up with startling facts of how the opponents of Telangana have compromised the CSDS survey. Read the first part below:


The Secret Chapter of Srikrishna Committee Report gave step-by-step instructions to subvert the genuine people’s movement of Telangana. It advised the Government to use the media outfits to manipulate the news and opinion in order to suppress the movement in Telangana.


The recent survey from two national media outfits CNN-IBN and CNBC-TV18 in collaboration with Center for the Study of Developing Societies (CSDS) throws open the question if indeed there is anything called fair media in this country.


According to the above survey, only 50% of the people living in Telangana want the state to be bifurcated. This comes as a bit of surprise to most Telanganas and observers who are familiar with Telangana Movement because there is a palpable and an overwhelming support for a separate state within the region. An opinion poll conducted by Andhra Jyothi in December 2010 in South Telangana has a different take on this. 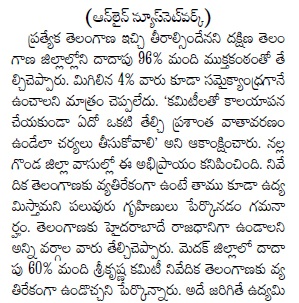 According to Andhra Jyothi, nearly 96% of the people living in South Telangana want a separate state. The recent by-elections conducted in ten constituencies of Telangana held after P Chidambaram’s December 9th statement, observed as an unofficial referendum on Telangana issue, gave TRS as high as 85% of the votes. Such huge percentage of votes to one candidate is unheard of in Indian democracy. There have been more than thousand agitations that have taken place in almost all parts of Telangana, from the cities to towns to villages, clearly displaying an overwhelming support for bifurcation of the state. In light of the above knowledge the current results published by CSDS come as a rude shock to most Telangana people.


On the next question: The Srikrishna Commission Report has provided six options on the issue of Telangana (See answer categories 1 to 6). Which recommendation do you agree with most? 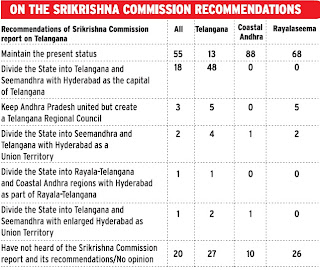 The survey concludes: A massive majority in Rayalaseema and Coastal Andhra supports the ‘status quo’ (united Andhra) recommendation of Srikrishna Commission. In Telangana, while the support for a division of Andhra is strong, it is nowhere close to the strong opposition to it in other parts of the State.


What comes as clear surprise is that nearly 27% of the people living in Telangana ‘have not heard of the Srikrishna Commission report and its recommendations/No opinion’. The number for the same question in Coastal Andhra is only 10%. Bulk of Telangana agitations are carried out within Telangana. Such ambivalence or ignorance within Telangana on an issue that touches almost every Telangana person doesn’t reflect the ground reality. It is like saying that 27% of Iraqi population has not heard of Iraqi war with Americans.


It becomes obvious that the report looks doctored or manipulated or badly done. Definitely, it does not capture the mood of the region.


Here are some interesting news items from last month which reveal the truth behind these distorted statistics. On 23rd July 2011, a group of Seemandhra youth was caught by Telangana JAC of Rudrampur of Khammam district while they were conducting a survey in Telangana. The T-JAC got suspicious when these Seemandhra youth were taking only the names & addresses from the people of the village without getting the questionnaire filled. 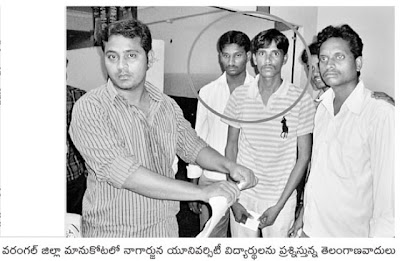 Picture: Image showing Nagarjuna University students conducting the CSDS survey, being detained by Telangana youth as they tried to fill up the questionnaires themselves


In another incident, a group of Andhras hailing from Nagarjuna University of Guntur were caught when they were conducting a survey in Mahbubabad of Warangal district. The identified youth were Kanneti Nagaraju and Tejawath Laxmandas. The questions include the preferred options on Srikrishna Committee report, status of Hyderabad, etc.


The news item which reported this event writes the following: “The Seemandhras were cleverly using the ploy of representing Center for the Study of Development Societies-CNN-IBN, State of the Nation Survey-2011”.


It could be a matter of sheer coincidence or a clever conspiracy that on the same day Lagadapati Rajagopal, MP from Vijayawada, was touring in Khammam district. His convoy was stopped by a group of Telangana activists. 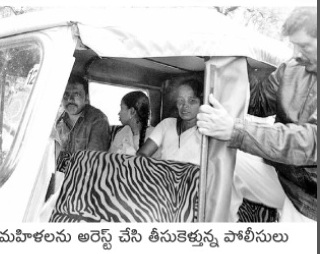 Picture: Image showing researchers from Vijayawada conducting the CSDS survey, detained by Wardhannapet Police as they tried to rig the survey.


In Wardhanapet of Warangal district, a group of women surveyors hailing from Vijayawada were caught by local youth while when they were trying to get only the personal details from illiterate people so that the actual questions can be filled by surveyors.


It is clear that methods employed by CSDS/CNN-IBN/CNBC-TV8 in their survey are questionable. The survey included people brought over from Seemandhra into Telangana thereby introducing the worst form of bias and cheating. The media outfits were following the recommendations from the Secret Chapter of Srikrishna Committee Report to employ Seemandhra journalists and analysts in Telangana to manipulate the news and opinion reports in order to contain the movement. Such egregious moves employed reputed media outfits are a disgrace to modern democracies.


Yogendra Yadav, The Hindu, CNN-IBN and CNBC-TV18 seem to be the new entrants in the long list of venal and corrupt analysts and media outfits in India who collude with the Government of India to suppress a genuine people’s movement.

Email ThisBlogThis!Share to TwitterShare to FacebookShare to Pinterest
Labels: జవాబులు 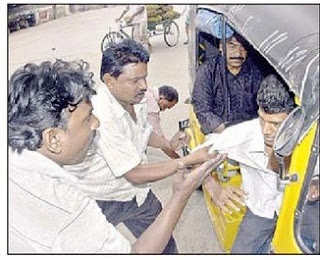 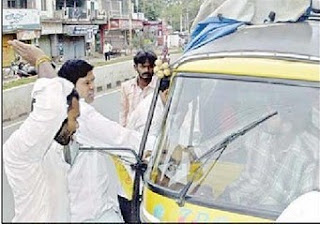 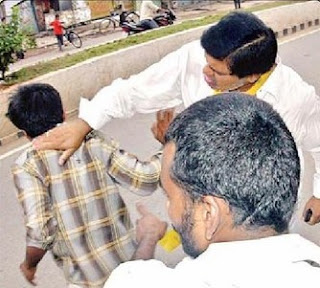 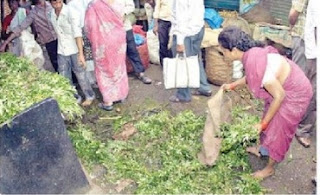 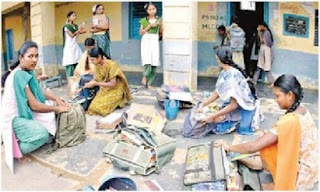 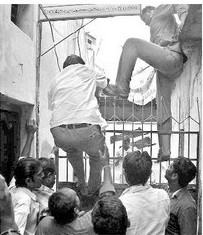 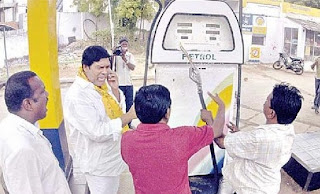